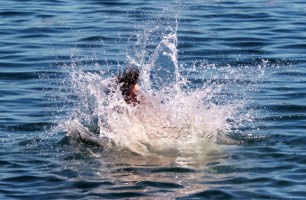 Warm air from the Mediterranean brought the year's hottest temperatures yet on Wednesday, as parts of the south of Germany sweated in 34C heat.
According to the German Weather Service (DWD), the year got off to a cooler start than usual with the coldest Spring since 2013.
After a relatively mild March, April and May were unusually cool, with bouts of snow, rain and hail striking across Germany. The average Spring temperature was a nippy 7.2C, while parts of the south experienced extremely wet weather.
But following this patchy start – and just a few weeks before the school summer holidays in the north, west and east of Germany – the country is experiencing its first heatwave with temperatures significantly over 30C.
On Wednesday, the country saw the hottest day of the year so far. Near Speyer, in the Waghäusel-Kirrlach area, the warmest temperatures  of 33.9C were recorded. In the picture below, a woman relaxes on the bank of the Rhine, with Speyer Cathedral visible in the background.
The north of Germany also saw high heats on Wednesday. In the scorching temperatures, people cooled off in the lakes and swimming pools. In the Kiel Fjord, in the northern state of Schleswig-Holstein, four men were photographed jumping into an area that had been closed off to swimmers.
Animals were also affected by the sweltering temperatures. In the agricultural region of Hessian Ried, a family of birds was pictured sitting with their mouths open in 32C heat.
At the popular tourist destination of Steinhuder Meer in Lower Saxony, Ilka and Jennifer brought their dog Fietje out to the pier to enjoy the sunshine.
In the wine-growing region of Franconia, young grapes in the Escherndorfer Lump vineyard basked in the warmth. Due to the unseasonably cold spring, the vines sprouted later than usual this year.
On the island of Heligoland in the North Sea, a photographer snapped a picture of a buoy lying on a deserted beach. Over the next few weeks, the school holidays will kick off in the states of Schleswig-Holstein, Hamburg, Mecklenburg-Western Pomerania, Brandenburg und Berlin, and with most states now open to tourists, deserted beaches are likely to be increasingly hard to come by.
On Thursday morning, swimmers in Hanover tried to beat the heat by heading for an early morning dip at Kleefelder Bad. Over the next few days, temperatures are due to soar in Germany, reaching a sweat-inducing 37C in parts of the north and east.
According to the DWD, the west and northwest could see isolated thunderstorms with hail and heavy rain on Thursday. Temperatures are likely to range between 30C and 36C, though the islands could remain a little cooler.