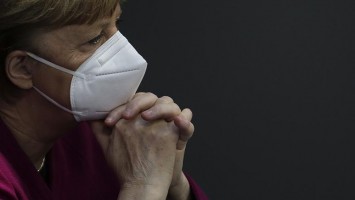 Merkel also admitted in a long interview with the public broadcaster ARD am Sonntag that her government had made mistakes, including the plans for a five-day Easter lockdown, which she then traced back.

"We must now take the appropriate measures with great seriousness. Some states are doing this, others have not yet done it," said Merkel, however, when some states were planning to lift restrictions.

One of the measures it deems appropriate is a curfew, which is not yet applied nationally in the country.

Merkel also called for more flexibility with regard to virus measures and stated that the Germans had a tendency towards "perfectionism".

"Maybe we are sometimes very perfectionist and want to do everything right, because obviously anyone who makes a mistake is always exposed to a lot of public criticism," said Merkel.

"But there has to be flexibility too," she added. "I think that is an attribute that we as Germans may have to learn a little more besides our tendency towards perfectionism."

Merkel told ARD that she was committed to offering every adult a vaccine by the end of the summer. So far, only 10% of the population has received a first dose of the vaccine.

Merkel said, however, that the country is doing well compared to its neighbors.

"We have a difficult situation," she said. "But look at our neighbors. With the exception of Denmark, everyone is facing the same problems, sometimes from a much more difficult position."

"We also need to show a little courage and strength," she said.

Merkel, who is not running in September's elections, has seen declining support, according to recent polls, and infections have risen despite restrictions.

Since the outbreak began, the country of 83 million people has seen nearly 2.8 million confirmed cases of COVID-19 and 75,913 deaths.